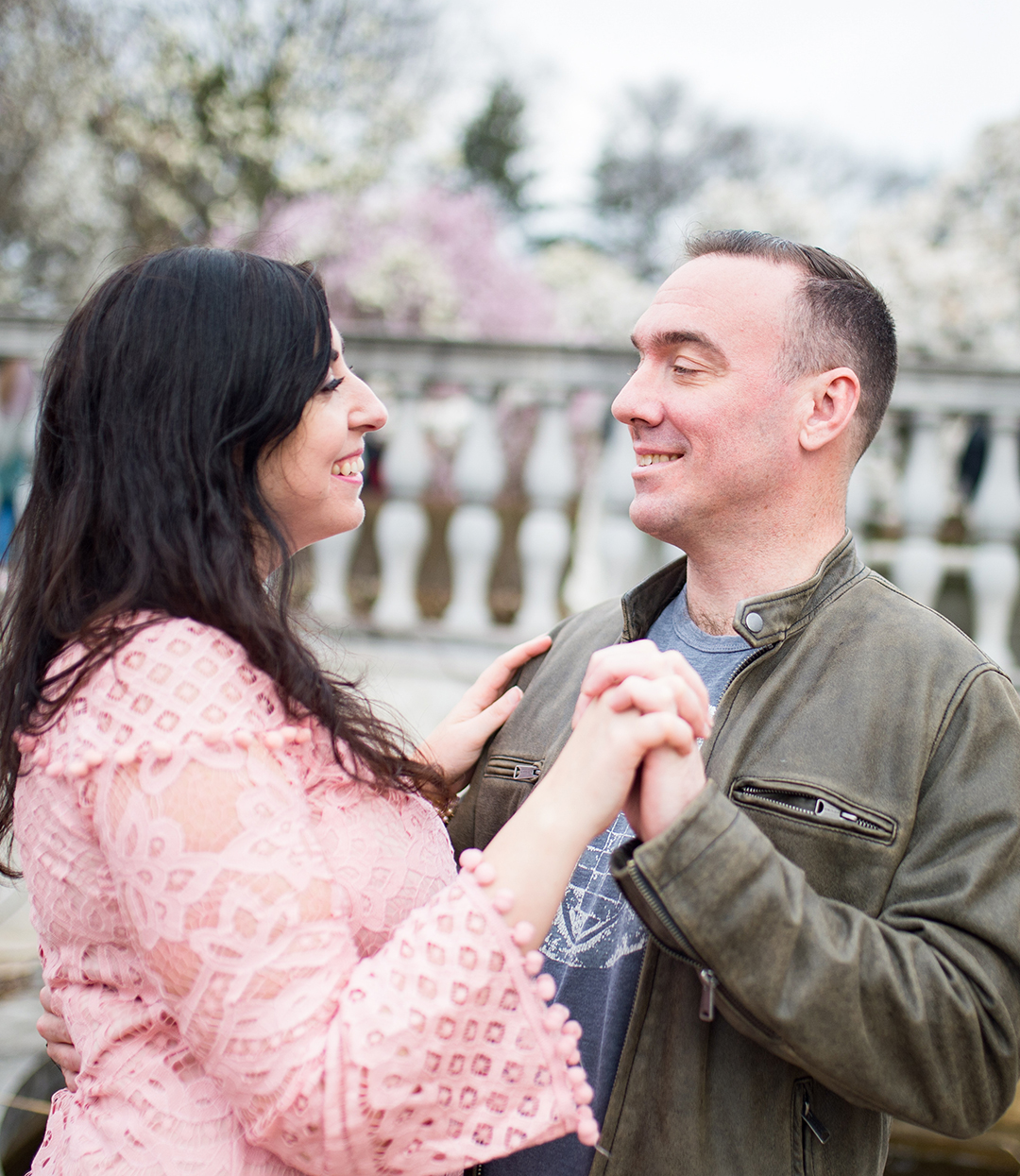 Many happy days ahead. Kicking off Wedding Wednesday: We are Engaged!
Photos taken April 2017 in the Brooklyn Botanic Gardens & on the Brooklyn Bridge

It’s the news I’ve been celebrating for over a year now: I’m engaged to be married!! About 90 days from now I’ll be the luckiest girl marrying an amazing guy on what will hopefully be a sunny day right here in NYC.

I know how fun it is to plan a wedding, attend a wedding or even just talk about weddings! That’s why today marks the launch of my Wedding Wednesday series. I’m very excited to share many of the details and goings on of Alex’s and my engaged experience.

Originally I’d planned to start this series over the Winter. However, we chose to have a long engagement (more about why in an upcoming post) so for a long stretch there really wasn’t much to talk about. In fact things didn’t really kick into high gear for us until a couple of months ago. It’s only in these last 3-4 months before our wedding that I understand why brides can be so stressed out!!

But we’ll get to all of that. For now, let’s talk about one of my favorite stories: how Alexander and I got engaged. 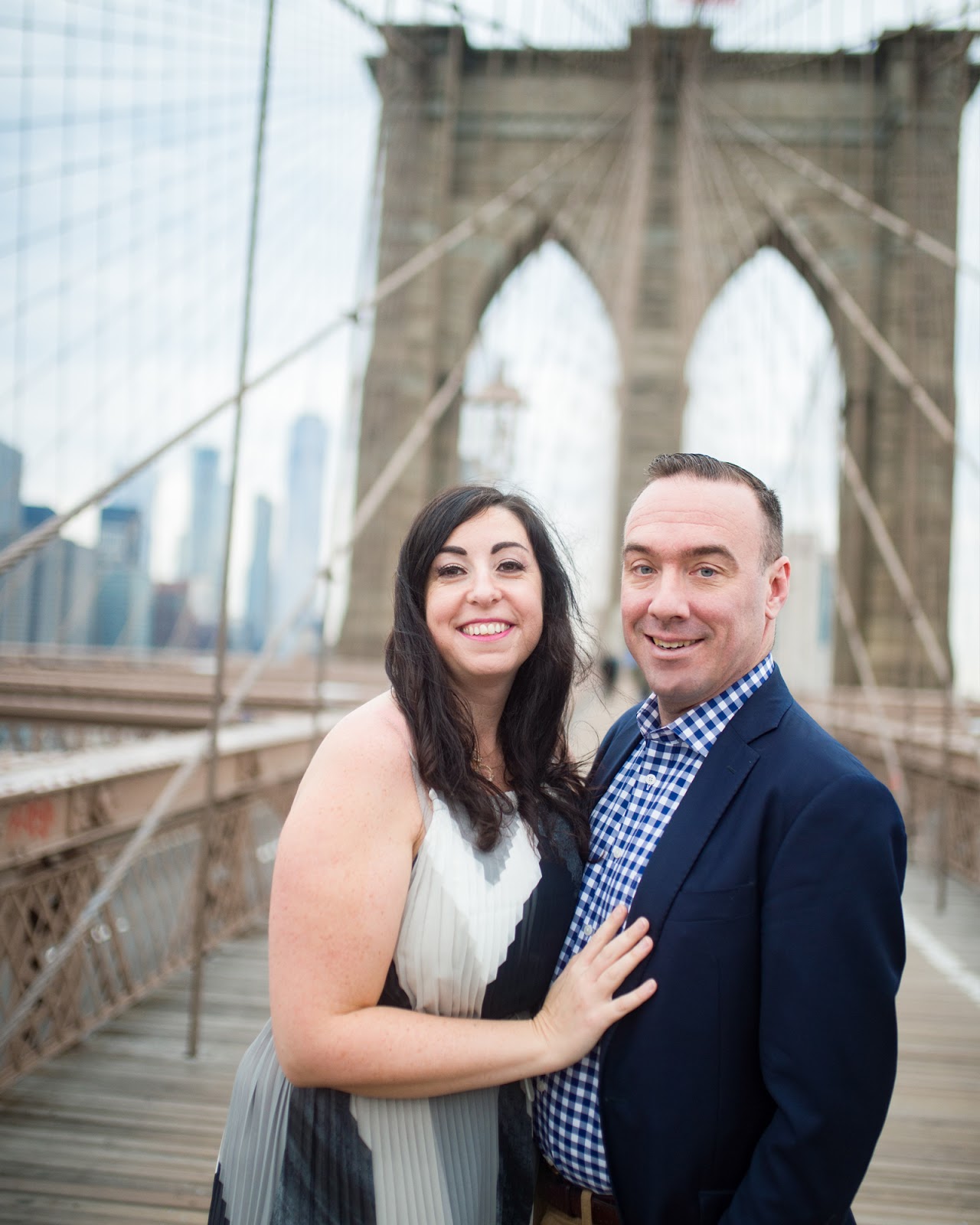 If you’ve been reading this blog for a number of years you may know that I was previously engaged in 2010 at age 28. And actually, I was engaged once before that in high school too. In both of those cases, I felt far too young to be walking down the aisle. I felt like my life was still in development and I was unsure of what I wanted or needed. I ended up breaking my high school boyfriend’s heart, something I still feel guilty over to this day. My later breakup was more amicable.

Marriage was something I started wanting around age 32. But truth be told, I don’t think I was really ready to be a wife until around 35 or so. (I’m 37 now.) Perhaps being ready isn’t something that’s required for a marriage to successful. But in the last 5-6 years I’ve done so much emotional repair work and emotional growth. My capacity for love and compassion has grown in leaps and bounds. My ability to not be selfish has increased exponentially. I’m not saying that I am perfect now or done growing — only that I feel ready to undertake the commitments that being a wife brings. 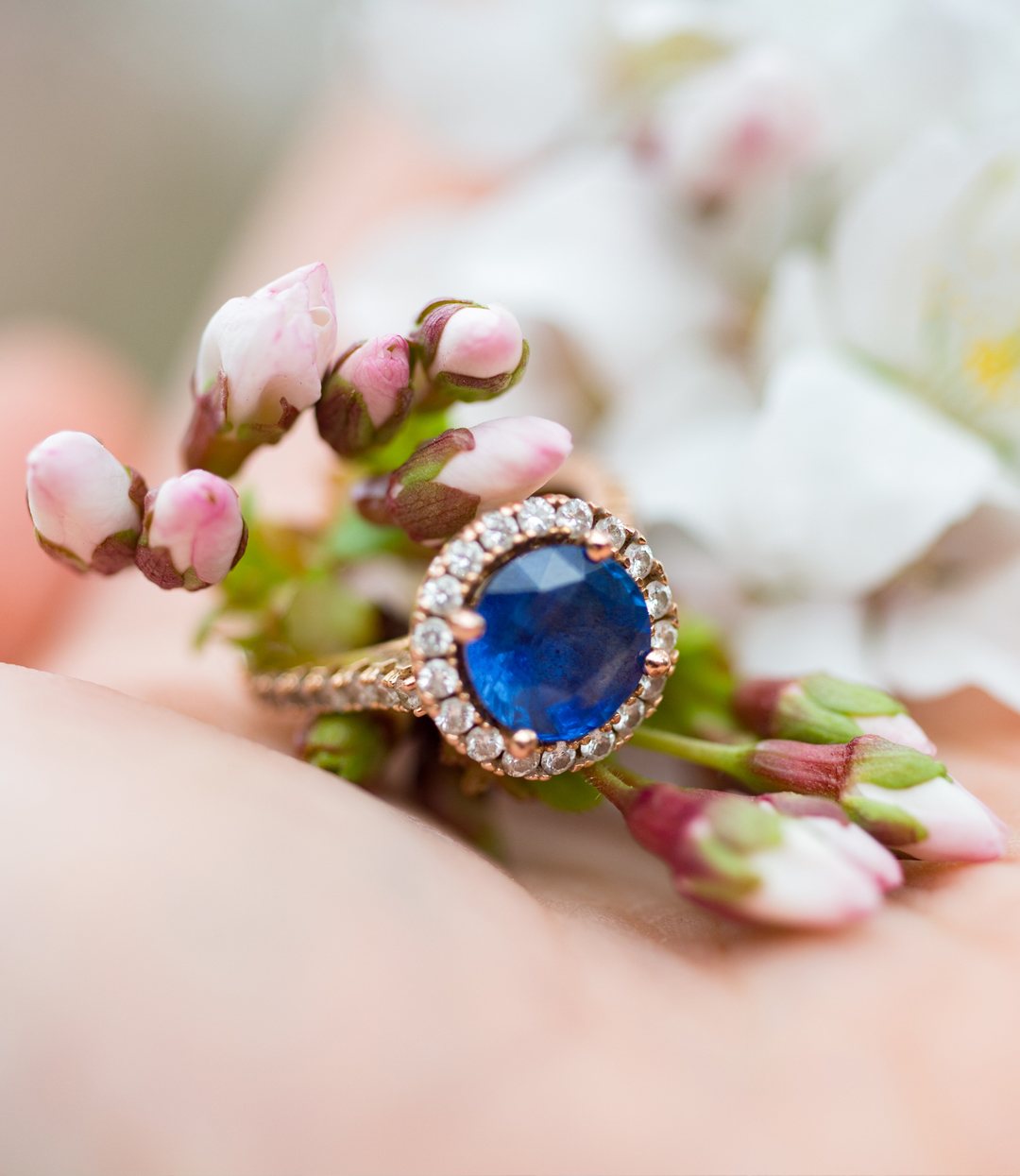 My engagement ring is a sapphire surrounded by diamonds on a rose gold band.
It was made by a jeweler in Manhattan’s Diamond District recommended by a family friend.

The most solid argument I have for marrying Alex is that our relationship has always flowed easily. It’s been the easiest relationship either of us have ever been in. Yes, we fight. All healthy couples do! But we hardly ever yell and there is always an underlying partnership and commitment to understanding each other even while arguing.

We met in the Fall of 2015 on a dating app. Our first date started as a simple meet up for a drink after work at the now-closed (*cries*) Flatiron Lounge in Manhattan. Alex picked a spot that was convenient for me — that was the first tick in his favor. Drinks went well enough that it turned into sushi dinner, which turned into Alex sending me home in an Uber.

He was always steady about planning the next date right after the previous one. Although I was seeing several suitors at the time, Alex stood out as being consistent and forthcoming in his interest. I knew things were growing in a good direction when we spent New Year’s Eve of 2015 together. It was an amazing night capped by watching midnight fireworks in Prospect Park (Brooklyn). That night was also the first time Alex said “I love you.”

We took our first vacation together in February of 2016 and by the end of the year we were moving in together. I moved allll the way to Brooklyn. It seemed like a huge sacrifice, but then again Alex made the even bigger choice to sell his apartment (which he felt was not big enough for us plus his two cats and my dog) so we could find a new place together. 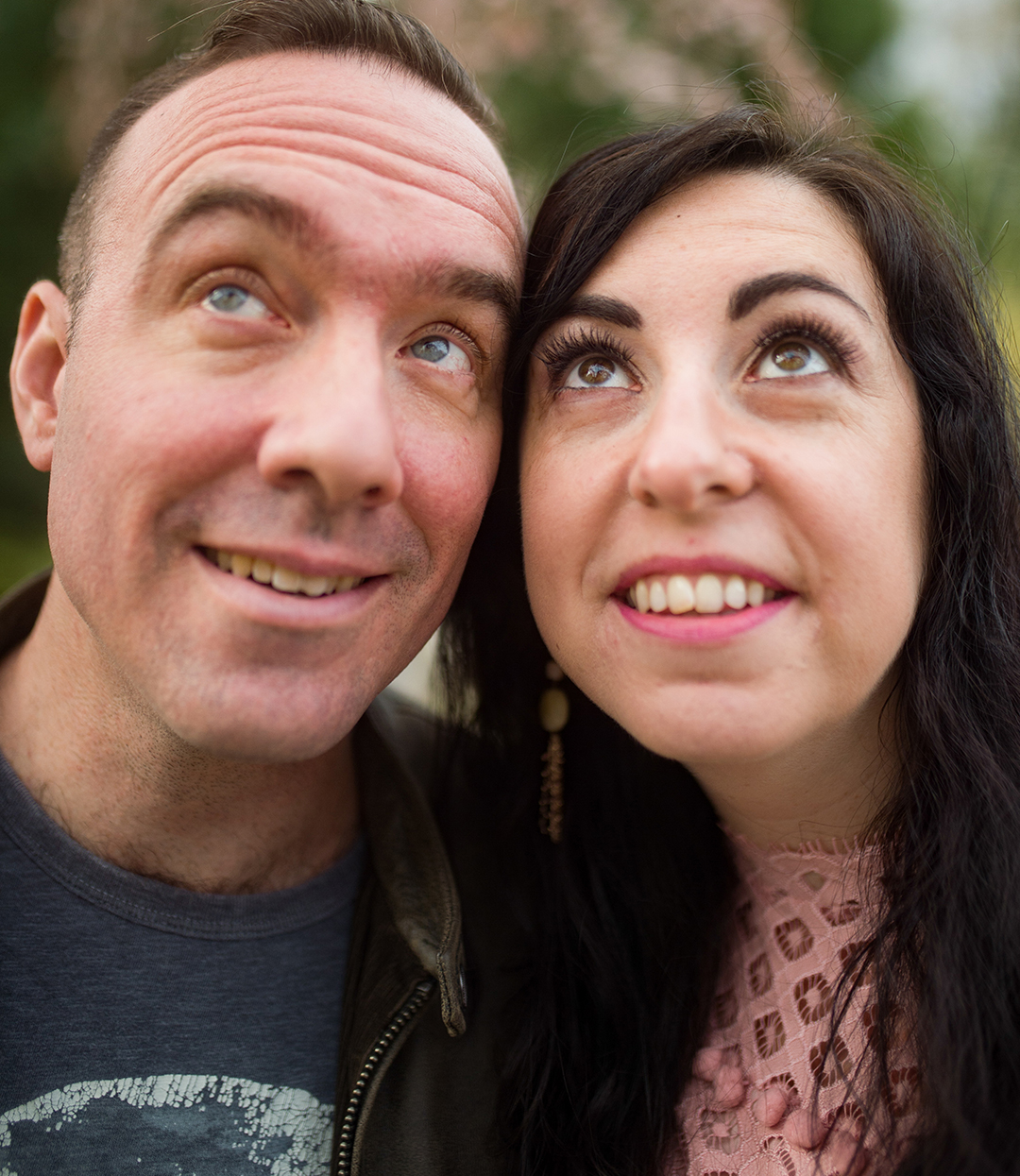 At first, living together was a huge adjustment. It was a rocky period for sure as we got used to each other’s routines, animals and decor styles. This period was the most we’ve ever argued. I’m so glad we moved in together before getting engaged, because a ring might have been one bit of pressure too much.

Over time however things steadied. By the Summer of 2017 my friends and family were starting to ask if we had plans to get engaged. Oh how the ones we love can plant those seeds! I started to wonder too and had hopes that our 2nd anniversary might be the right time. Yet when October came Alex instead said he wasn’t ready, which had me wondering whether he was the right guy for me to be with forever or not.

Unbeknowst to me, shortly after our two year anniversary in October of 2017 he started floating the idea of us getting engaged. He asked friends and family about their perspectives on married life. Alex started thinking about rings and told his Mom he was thinking of asking me.

My closest friends counseled patience and I’m so glad they did. When November rolled around and it was time to make our Christmas lists, my friends suggested putting an engagement ring on the list. So I did! I linked to three styles I liked.

I had no idea but Alex had already started working with a jeweler on a ring for me — and had to completely change design course when he saw what I wanted! He also used my wishlist as an opportunity to get important details. 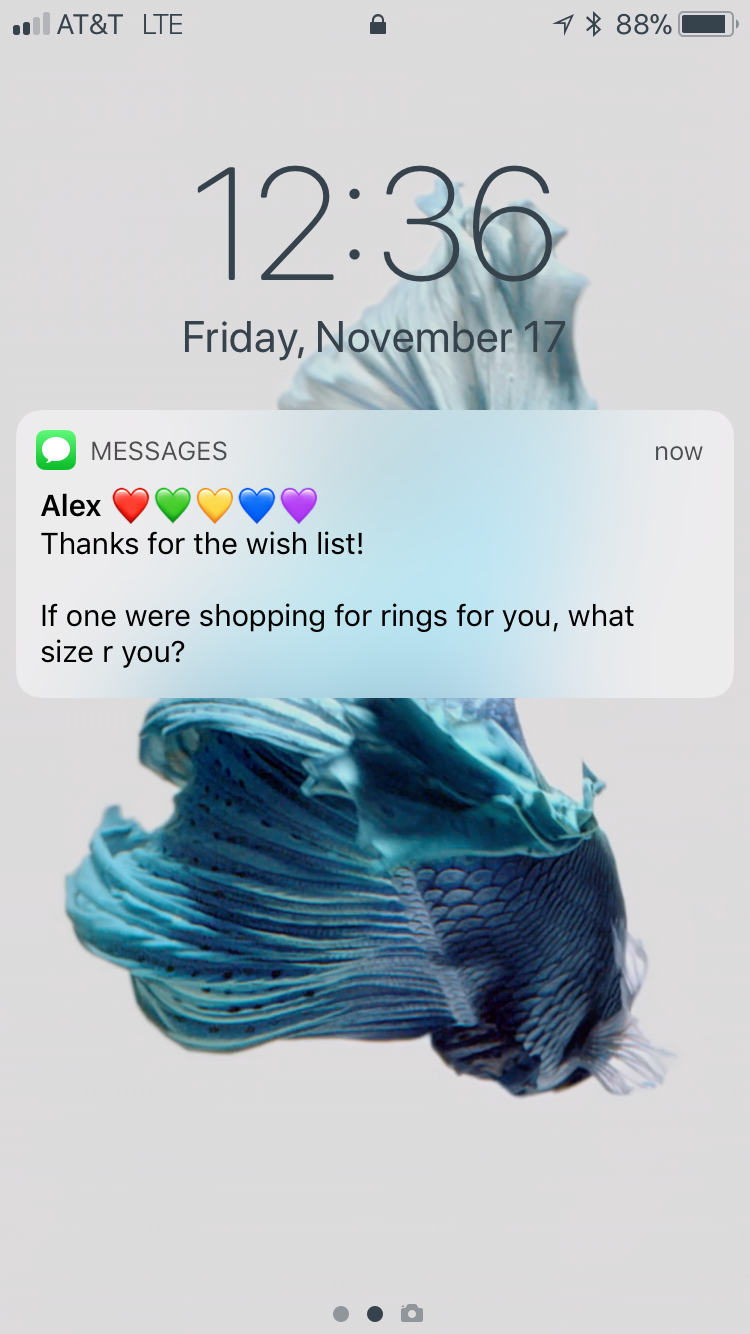 That Alex, such a sly guy!

I couldn’t help but share the screenshot with my girlfriends. The excitement reached a fever pitch! They were happy for me. I was happy for me and Alex!! But suddenly the wait for the ring became excruciating. Looking back on it I fell into the trap of being impatient.

While some of my patient girlfriends counseled me to wait, others were texting me practically every day guessing when the ring might come. “I’m sure it will be today!” said several girlfriends on Thanksgiving. (It wasn’t.) “Tonight would be perfect,” two friends said on the first night of Hanukkah, followed by “It has to be tonight!” on the last night. It wasn’t then either.

By Christmas, my excitement over the possibilities was turning into frustration. I didn’t know until later that Alex had the ring and was just waiting for the right time. Knowing my love of fireworks, he was thinking New Year’s Eve would be perfect. 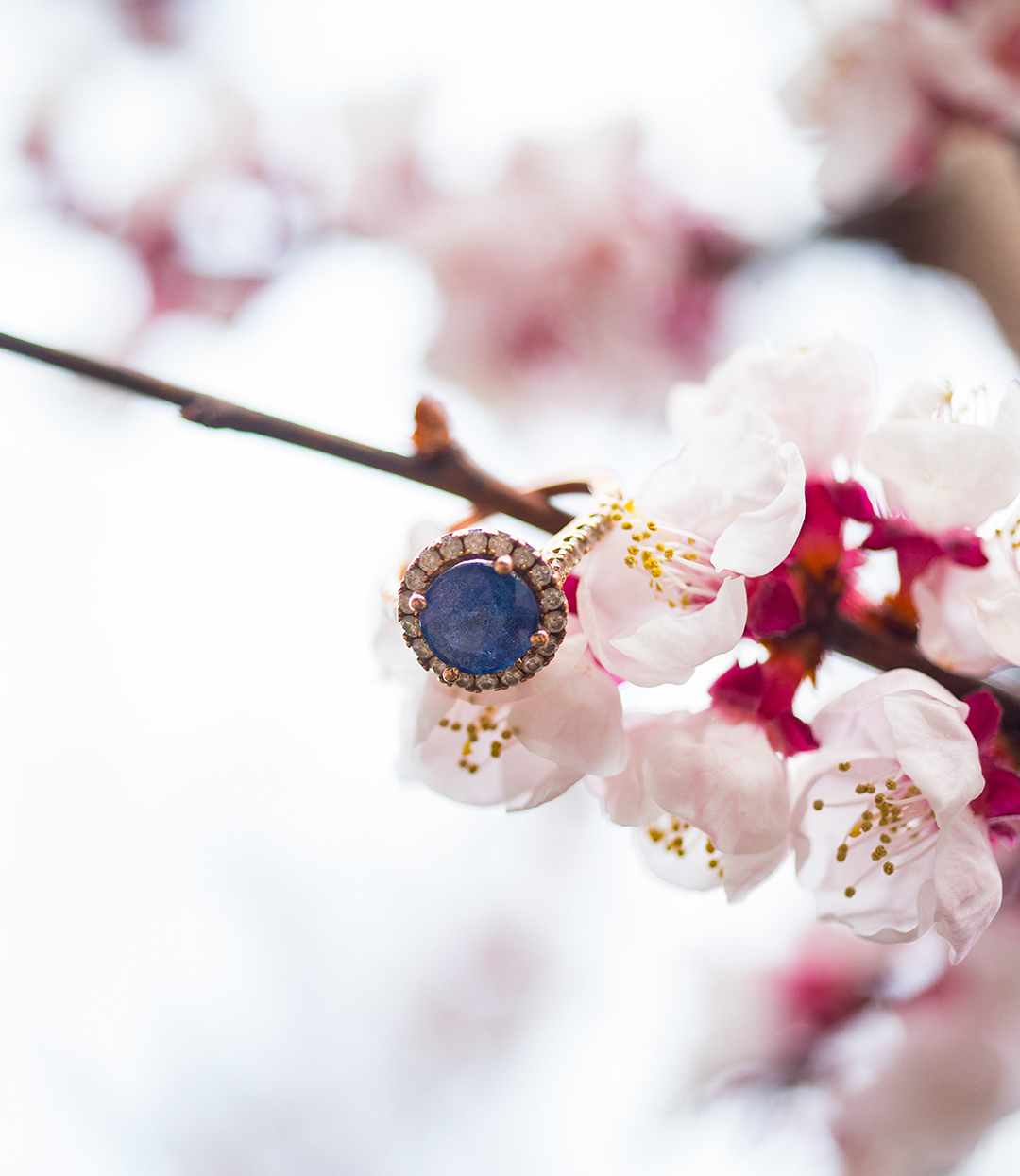 But he quickly changed his mind! We spent Christmas with his family in Sag Harbor NY as is our tradition. His parents, aunt and uncle and cousin and her boyfriend were all there. On Christmas day we each take a turn opening a gift. My last gift just so happened to be a box. A ring-sized box. A ring-sized box from Alex!!!

This is it for sure!! I thought to myself. I opened the gift slowly, wanting to savor every moment. Everyone was watching me as a smile spread across my face. But when I opened the box, it wasn’t a ring. I can’t even remember what it was anymore; I’m sure it was lovely but it wasn’t an engagement ring and I couldn’t hide my disappointment.

Between the right-sized box but no ring and my phone constantly lighting up with “did he ask yet?” texts, I was crestfallen. I sadly texted back “no” to all my girls. By dinner I was nearly distraught. Alex saw my sadness and made a new game plan.

After dinner, we all opened holiday crackers. You know, those party favors that look like giant candy wrappers with twisted ends. When you crack them open inside there is a paper crown, a mini toy of some kind and a riddle. We went around the able asking each other riddles.

Alex went last. When it was his turn, he said, “I have something to ask Thea.” (That’d be me, y’all know by now that Roxy is a nickname, right?)

Before I knew what was happening, Alex stood up, walked around the round table to where I was sitting, got down on one knee and asked if I would marry him!! And I of course started bawling because up until that very moment I’d been so very sad but just like that I switched to elation!! Everyone started cheering and I just kept crying. 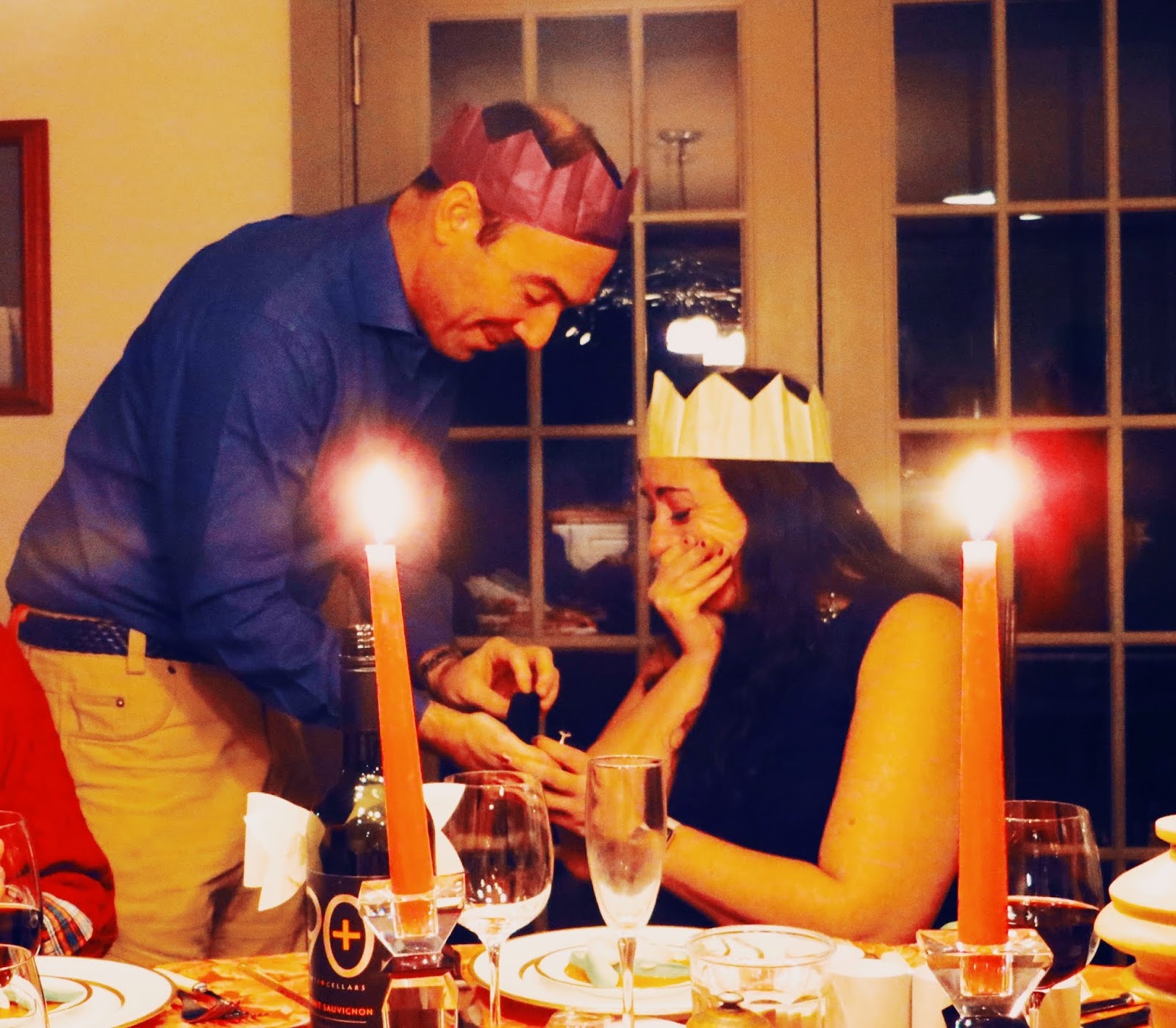 I’m so grateful that Alex’s cousin Lily got her camera out and snapped a few photos!! It’s a moment I will never ever forget. We excused ourselves for a few minutes to call my Mom and Sister, and then came back upstairs to celebrate with Alex’s family for the rest of a wonderful night. A few months later in April we took our engagement photos while the magnolias were in bloom, with the cherry blossoms about to open.

When others have asked Alex why he decided to propose or when he knew he wanted to marry me, he doesn’t have one solid answer. (Or more likely knowing his personality, he doesn’t want to share.) When our officiant asked us during our initial meeting with her, Alex said my happiness is important to him and he knew getting married would make me happy. Pardon me while I melt into a puddle on the floor over here!

It’s funny. We got engaged on December 25, 2017. In the time since then we’ve had friends who have gotten engaged and married (we’re attending just such a wedding this Friday!!). In this time Alex’s brother reconnected with an old flame, they got pregnant and married and now have a 4-month-old baby!! Alex’s Mom and Dad are basically having the best 18 months ever. Several of our friends have gotten pregnant, to the point that my girlfriends now say Alex and I getting engaged is good for fertility. 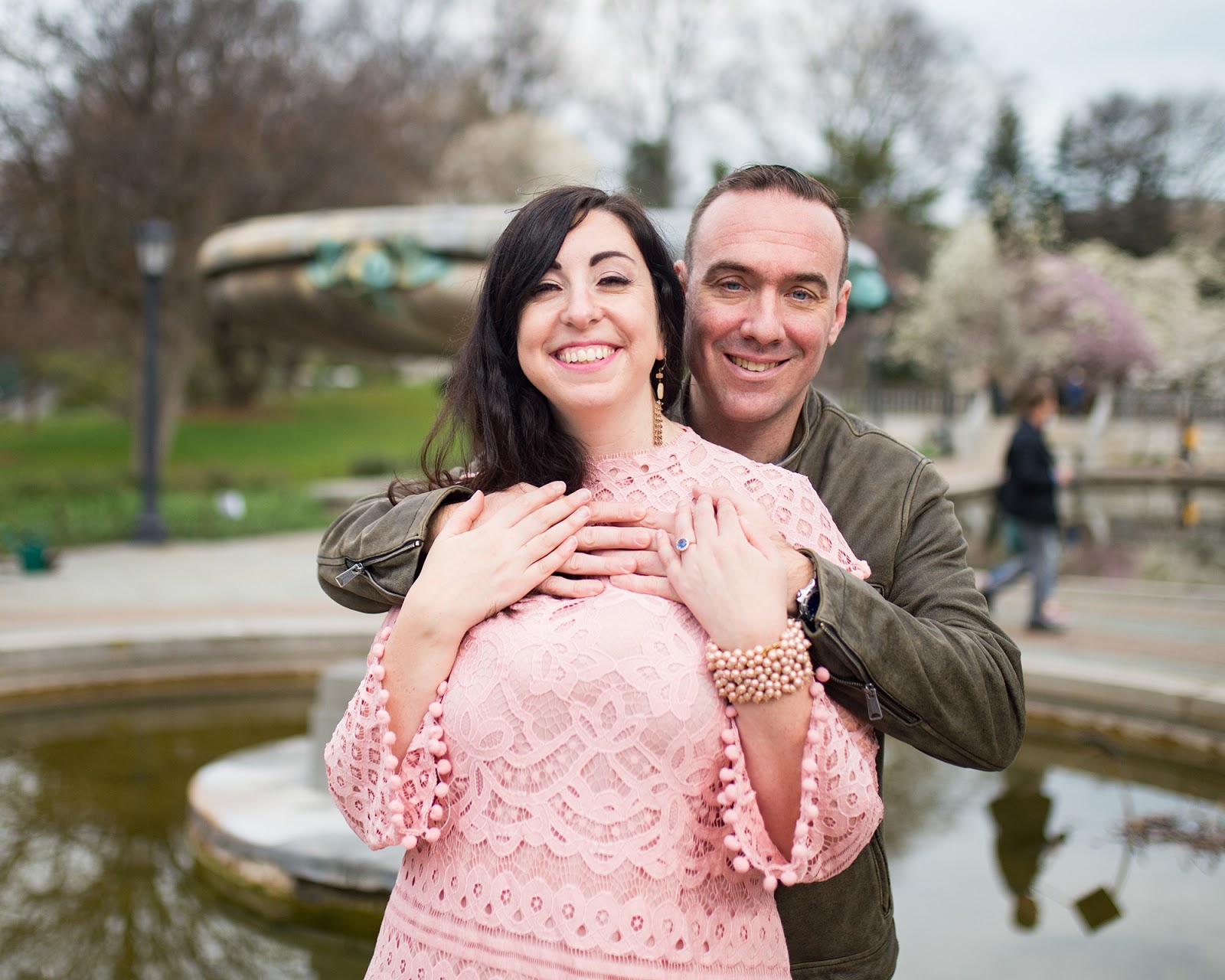 It’s amazing how our long engagement has allowed so much happiness to develop around us. And for us, it’s allowed us to enjoy this very temporary time. I love being called ‘my fiancée’ by Alex! I love calling him my fiancé! (He doesn’t like the word very much, but then again most guys don’t.)

I adore the feelings that come with the knowing anticipation of a wedding. I like all the questions about how we met, when we knew, what we’ll do and so on. I’m enjoying the countdown to becoming Mrs. Alexander Cripps.

And in another way, as much as this day is about us, I’m also enjoying all the happiness this time brings forth inside of me. It’s hard not to be happy when you know that a wedding is on the horizon with all its happy moments to come.

As this Wedding Wednesday series you can expect the story of my experience planning our wedding. I’ll share resources I’ve used and helpful sites I’ve found. Plus I’ll be sharing how to plan a great engagement party and bachelorette weekend! There will be reflections, lessons I’ve learned and more. This series will continue to run after our actual wedding so I can share how everything went too.

If you are (or were) married, how did you get engaged? Was it a surprise or planned? Who was the first person you told??? 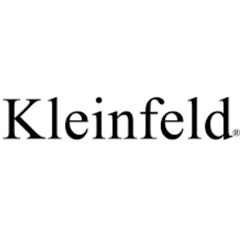 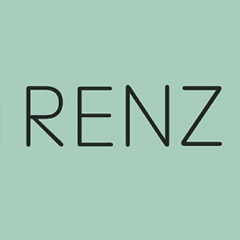 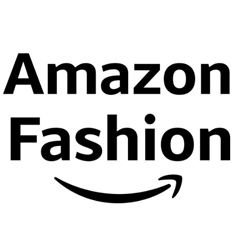 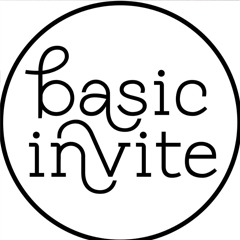 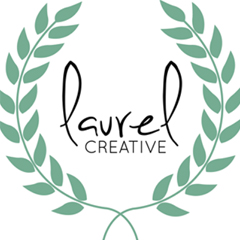 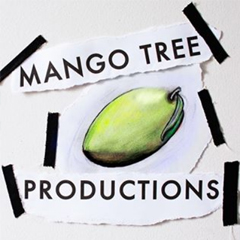 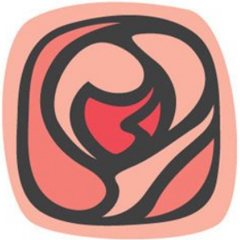 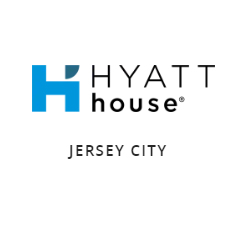 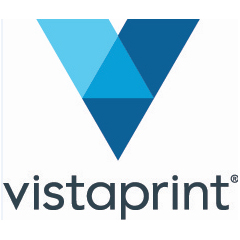 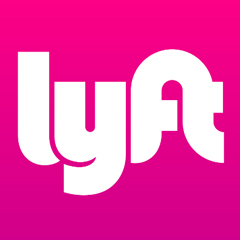 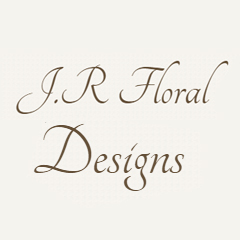 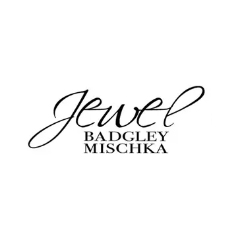