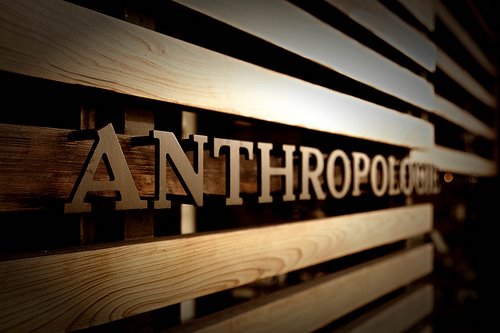 It’s time for our favorite post each quarter! Let’s dissect Anthropologie parent company Urban Outfitters Q4 2018 results! Earlier this month the earnings call was held. After a week with no transcript online I feared the results would be secret and in some long-lost vault of calls un-transcripted. Luckily, the call notes did eventually appear online which I am very grateful for.

First, as always, let’s start with the financial part of the call.

“Total Company or URBN sales for the fourth quarter of fiscal 2018 increased 6% versus the prior year. The increase in sales resulted from a 4% URBN Retail segment comp, a 6% increase in Free People wholesale sales, and a $16 million increase in non-comp sales.

Digital growth was driven by increases in sessions and conversion rate, while average order value was flat. Store comp sales remained negative, due to declines in transactions and units per transaction, which more than offset increases in average unit selling price.

By brand, our Retail segment comp rate was positive at all three brands with increases of 8% at Free People, 5% at Anthropologie and 2% at Urban Outfitters. Our URBN Retail segment comp was the strongest in January, followed by November and then December.”

Anthropologie had its fourth straight quarter of positive results, which is fantastic and a bit unbelievable! When I read this I thought to myself that home, beauty and such must be propping up the apparel results a bit, and this was confirmed later in the call.

Before we get to that though, you should know that there are three new Anthropologies on the way (no word on whether these are Anthropologies or Anthropologie & Co large format stores), and that Urban Outfitters plans to close 11 stores across all its brands, though it didn’t announce a specific breakdown. I have to believe that one of the stores to go will be the Spring St Free People in Soho, because they recently opened a much larger outpost a few blocks away on West Broadway between Spring and Broome. There’s no reason to keep both stores open.

Next up on the call was commentary on Urban Outfitters Q4 2018 results from CEO Richard Hayne.

“For the past several years, we, along with most apparel retailers, have faced powerful headwinds. The economy has been sluggish and wage growth stagnant. Technology has disrupted our channel economics. And our most important product category, apparel, has remained stuck in the fashion rut of skinny jeans and yoga pants. One article published in Bloomberg news entitled The Death of Clothing, declared that fashion was over forever. Well, I believe, reports of its death have been greatly exaggerated, to borrow a phrase.

This fashion revival doesn’t mean there aren’t too many apparel stores in North America, there are. And it doesn’t mean that technology has stopped causing disruption, it hasn’t. In fact, in the fourth quarter, digital penetration of our total Retail segment sales exceeded 40% for the first time. What the resurgence of fashion demand does mean is an opportunity to succeed in spite of these hurdles which is why we’re so excited and optimistic.

Before I turn the call over to the brand leaders to discuss their respective results, I want to discuss the impact of the new tax laws on the Company. We believe that if we perform to our FY19 plan, we could experience a reduced tax burden greater than $30 million. Given this reduction, the resurgence of fashion and the state of the economy, we believe larger investments in future growth projects are warranted. During the year, our plan reflects incremental investments to support our fast-growing digital business, including upgrades to our capabilities around mobile, personalization, loyalty, marketing, search, ease of checkout and load speeds. This will require hiring additional engineers and project managers and contracting with more service providers.”

Certainly the tax reform bill has helped businesses, and it’s great to hear that Urban Outfitters plans to use their newfound bounty to invest in further personaliziation and loyalty projects! I’m still sad that they condensed all their brand websites into one — FP Me on Free People’s site remains a shell of its former fabulous self. Anthropologie’s galleries are gone though that could be because they only seemed to want to show one or two body types in there.

I would love to see a more functional wish list on Anthropologie’s site, and better store search options. Right now for example the site keeps populating the wrong location information for me, often showing weirdly store results for Virginia or Oregon. Additionally, I would love to be able to pick my preferred store — when I lived in Harlem the location-based store search’s top results were always in New Jersey which is hardly local nor convenient for a Manhattanite, and now in Brooklyn I almost always see the Fidi Anthropologie’s results first. And they don’t seem to carry much!

By the way Anthropologie, open an Anthro & Co in Brooklyn. Pretty please? Preferably not in Williamsburg.

Next on the call it was Anthropologie Group CEO David McCreight’s turn to share his comments.

“As we mentioned on previous calls, store traffic patterns had been improving, but we had yet to experience commensurate improvement in sales. We are happy to report that the Anthropologie stores delivered a positive Q4 sales comp, notably while our digital business continued its double-digit expansion.

For the first time in a while, product growth was fueled not only by emerging the businesses of Home, Accessories, Beauty, BHLDN, and Terrain, but also supported this past quarter by our apparel category which posted a positive comp.

Interestingly, as we moved beyond the holiday season into January, both the Anthropologie apparel and accessories divisions experienced a marked acceleration in demand for spring transition goods.

Dick’s early call, hailing the imminent arrival of a bottoms-led fashion cycle is looking prescient. Indeed, bottoms are our fastest growing category, but the improvement in apparel trend has been broad-based across most apparel categories. I attribute much of the recent trajectory to the merchant, design and creative teams’ better alignment with our customers’ tastes. Under Hillary’s leadership the teams have delivered clearer product messaging in both channels and sharp execution of the season’s transition strategy.”

I have several thoughts here. Firstly, customers were probably eager to see Spring Anthropologie stuff in January because the Winter collection was awful. Sorry but you know it’s true Anthropologie Now I shall leave my critiques behind because the rest of this news is great! I very cautiously agree that the apparel is showing marked improvement. Is there still boxy crap? Yes. Are the dresses by and large still cut way too small in the boobs, or way to big overall to flatter? Yes. However, as we discussed last week, Anthropologie just might be getting cute again! That is something I welcome.

I was a little disappointed that there was no direct commentary on how the Anthropologie & Co large format concept is doing. Are they still seeing great results? Are they planning to open more? These questions remain a mystery for at least another quarter. Personally I’ve been mostly impressed by these bigger stores, though not always. The Westport, CT Anthropologie & Co for example is huge and beautiful; the Financial District Anthropologie & Co is such a small space it doesn’t deserve the name. 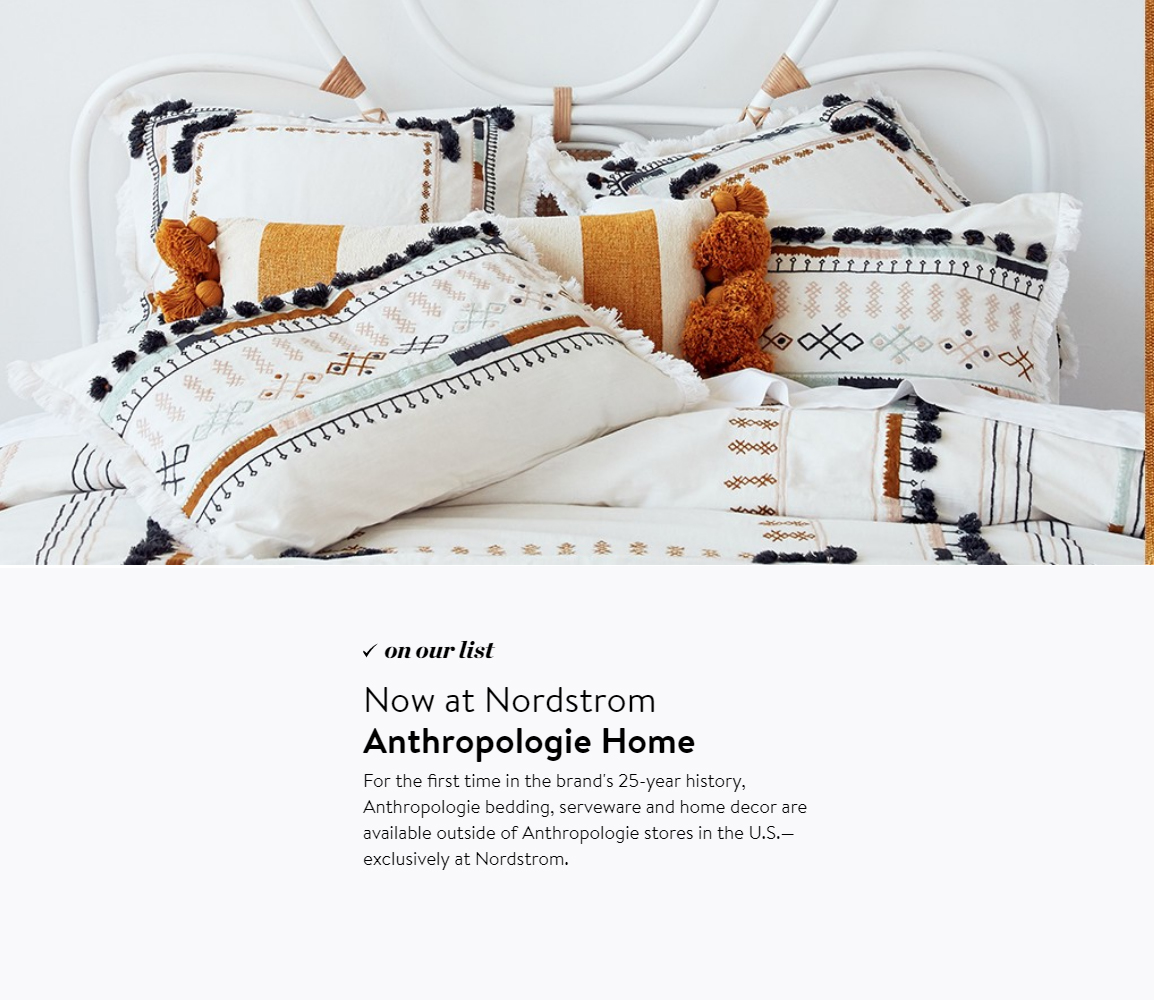 There was some very exciting news in Mr. McCreights’s Urban Outfitters Q4 2018 results commentary for Anthropologie however. And that is the launch of Anthropologie Home at Nordstrom!! The announcement was nearly hidden in a spate of good news and I have so many questions, but here’s what we do know. As of now 15 Nordstrom stores will carry Anthropologie home goods, while on Nordstrom’s website much from Anthro’s entire Home line except furniture is available.

One of the analysts directly asked about this collaboration.

Mark Altschwager
“The Nordstrom news was really exciting. Just curious how quickly that could ramp. And what’s the opportunity to expand beyond home?”

David McCreight
“We are thrilled to be rolling out domestically with one of URBN’s strategic wholesale partners. And we have mentioned we are building on the very strong relationship. Free People has built with Nordstrom over the years. And we see some really interesting strategic synergies between the brands. As you know, Nordstrom does not have a particularly strong home business; Anthropologie has a very strong home business, but they also have wonderful customer base and very similar standards that we do. We are going to start off with roughly four to five stores in early — sorry, 15 stores early scattered throughout the nation. About half of those markets have Anthropologies and other half of them do not have an Anthropologie store nearby.

And then, based on the early response and confidence from the Nordstrom’s team, we are looking to expand, I’d say relatively aggressively into fall…

Richard Hayne
“And Mark the other answer to your question, which is, could we have other product categories from either Anthropologie or Urban Outfitters Wholesale through the Nordstrom channel, yes, I think that that’s possibility, and that we are thinking about that as we speak.“

So, Nordstrom stores will carry Anthropologie Home items to start with plans to ramp that number up by Fall 2018. Very exciting! Nordstrom has an excellent customer service policy and generous free shipping policies, and the fact that stores will have Anthro home goods in them can only be good news. I’m very excited to see how this goes over the next quarter!

Below some of my favorite Anthropologie Home items you can now find at Nordstrom. If you love shopping at Nordstrom as much as I do, be sure to check out this post about a very special in-store shopping event coming up this weekend!